What Is Elixir? The Web3 Game Platform

If I had a Bitcoin for every time I heard the phrase “Steam for blockchain gaming or Web3,” I could retire now. Elixir has shed its official reference to Steam, but still bears many similarities. So, what is it?

Many different platforms are trying to fill a gap that Steam created about a year ago when it was announced they wouldn’t allow crypto or NFTs on their platform, effectively meaning no Web3 games. Since then, there has been this vacuum many are competing for, in order to win the coveted title of “Steam for Web3.”

This week, we will dive into one of those platforms, Elixir, and learn what they are, what games they host, and we will discuss if we even need a Steam for Web3. Funnily enough, as I was writing this article Elixir announced they will no longer be comparing themselves to Steam, a good move on their part.

Today we’re removing the term “Steam” as a reference for our platform.

While it was helpful for sometime to help others understand model, it’s way beyond just distribution. 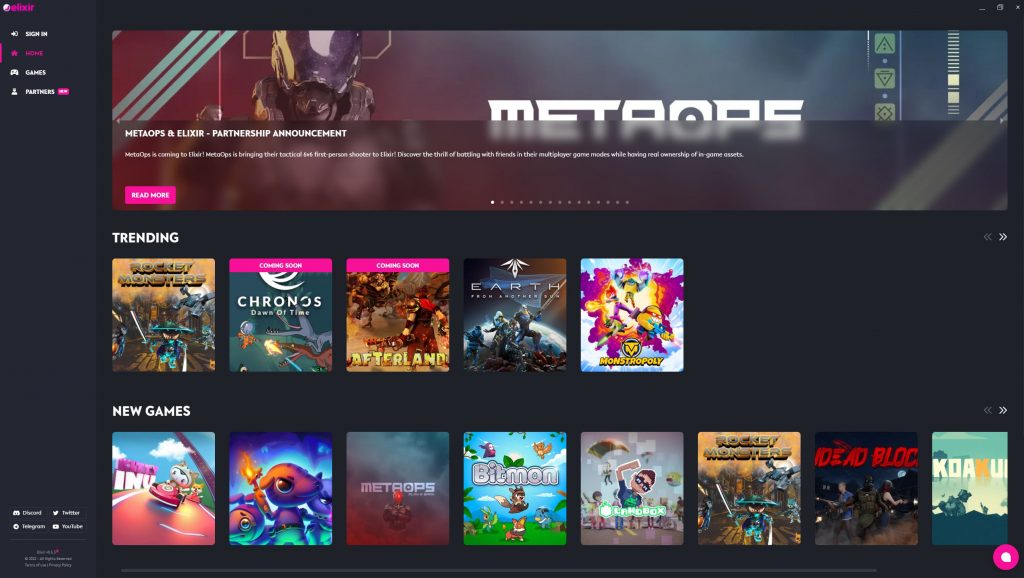 As stated above, Elixir is another platform contending for the title (up until recently) of “Steam for Web3.” You can download their client on PC or Mac, and then from there see the different game selections that they offer. You can even use their app from a browser, meaning games downloadable on mobile are also available.

When you find a game you like you can click on it and find out more details, including what systems it’s available on, gameplay footage, publisher, release date, blockchain, and quite a bit more useful information. You are also given easy links to the NFTs connected to each game and their appropriate marketplace.

Something I found interesting is the developers are intentionally avoiding the term “NFT” and instead branding them as “skins.” In theory, this will be more attractive to traditional gamers. I’m skeptical it’ll have any practical benefit and may cause unnecessary confusion instead. I don’t see why the term “skins” will appease traditional gamers, especially once they find out they are in fact NFTs. It’s also not accurate to label all gaming NFTs as skins. While many games do use NFTs to represent different skins, they are so much more than that, and to relegate them to one category is a misstep.

We crafted this release with special love to make #web3 gaming mainstream. No more NFTs references. What?! Yep, now they're called skins.

As you can see from the tweet above, they have also recently added WAX and Magic Eden functionality on their hub. They already boast integrations with Polygon, Binance, Solana, OpenSea, Metamask, etc., with about twenty total integrations. I assume they will only continue to add integrations as they try to appeal to a wider audience.

What Games Can I Find on Their Platform?

Currently, the selection of games on the Elixir platform is small, but they do host a number of notable titles such as MetaOps, LandBox, Undead Blocks, Life Beyond, Earth From Another Sun, etc. They also have a pipeline of various games under their “Coming Soon” category.

I wouldn’t expect them to have many games listed, because honestly there aren’t many blockchain games! So it is encouraging to see them have some of the better titles already hosted on their site. Moving forward, I would like to continue to see them expand their game offerings.

Another encouraging element in this area relates to something already mentioned: They have integrations already with WAX, Solana, Polygon, Binance, and Ethereum. This means they are able to host a wide spectrum of games. Of course, there will always be games that deploy on their own chain, but in general, it seems as if Elixir will have the ability to host the majority on the market. I’m glad they decided to start this way, and not only host games from one particular chain. I imagine this will help them with adoption early on.

Do We Even Need a Steam for Web3?

But is Elixir — and other platforms like it — really necessary? What’s the real benefit to them, or why should you bother using them? These are all valid questions you may have.

I’m not convinced yet that a Steam for Web3 is necessary. I believe mainstream adoption will happen soon enough, and once it does, Steam will surely need to change their stance on crypto and NFTs. If that happens, I don’t think these competitors will be developed enough to survive against the giant in the gaming space that Steam is. Practically, what I’m saying is that I think Steam will eventually be the “Steam for Web3.”

In this in-between time, while Steam still rejects blockchain games, I can see clear advantages to a platform that hosts games. For one, it’s an additional layer of vetting, so games published have met at least certain criteria. It’s also safer for the end user to use one single source to download their games from because those files shouldn’t be malicious. Hopefully, this will help protect the end user from scams.

Another benefit a hosting platform can have, particularly in the Web3 space, is the ability to reward active users in crypto or NFTs. This sort of mechanism is attractive to gamers who play a variety of games, and can now get more tangible rewards for using a website continually. This idea of brand loyalty will help platforms like Elixir keep their users.

If you have additional thoughts on Elixir or other platforms like it, let us know about them in the Token Gamer Discord!

Lead image made in part by ELLA DON on Unsplash