A promising new game by WAX Studios, creators of Blockchain Brawlers. But what is it, how do you play, and how much will it cost?

WAX is one of the leading blockchains in blockchain gaming, housing many of the most popular games by Unique Active Wallets on DappRadar. WAX Studios is WAX’s dedicated blockchain game development wing, headed by Michael Rubinelli, known for their fledgling but promising debut game, Blockchain Brawlers.

What Is Music Mogul?

Music Mogul is a music tycoon, Play-and-Earn game on the WAX blockchain where you build your own record label into an empire. The details past this are sparse presently, but there is an interesting piece of insight into how the game will play:

The game will feature all-new mechanics never before seen in a play-and-earn game requiring real strategizing and decision-making by players hourly, daily and weekly.

Regular readers of Token Gamer will know why I think this is important: we don’t want more mindless clickers. This game is described as a tycoon and as such, we can expect a lot of strategy, seemingly at different intervals. These decisions will impact weekly PvPvP competitions.

To get involved, you need to get your hands on some NFT musicians which can be done by buying Music Mogul packs. 5,000 will be dropping on 28th June 2022 at $75 each. 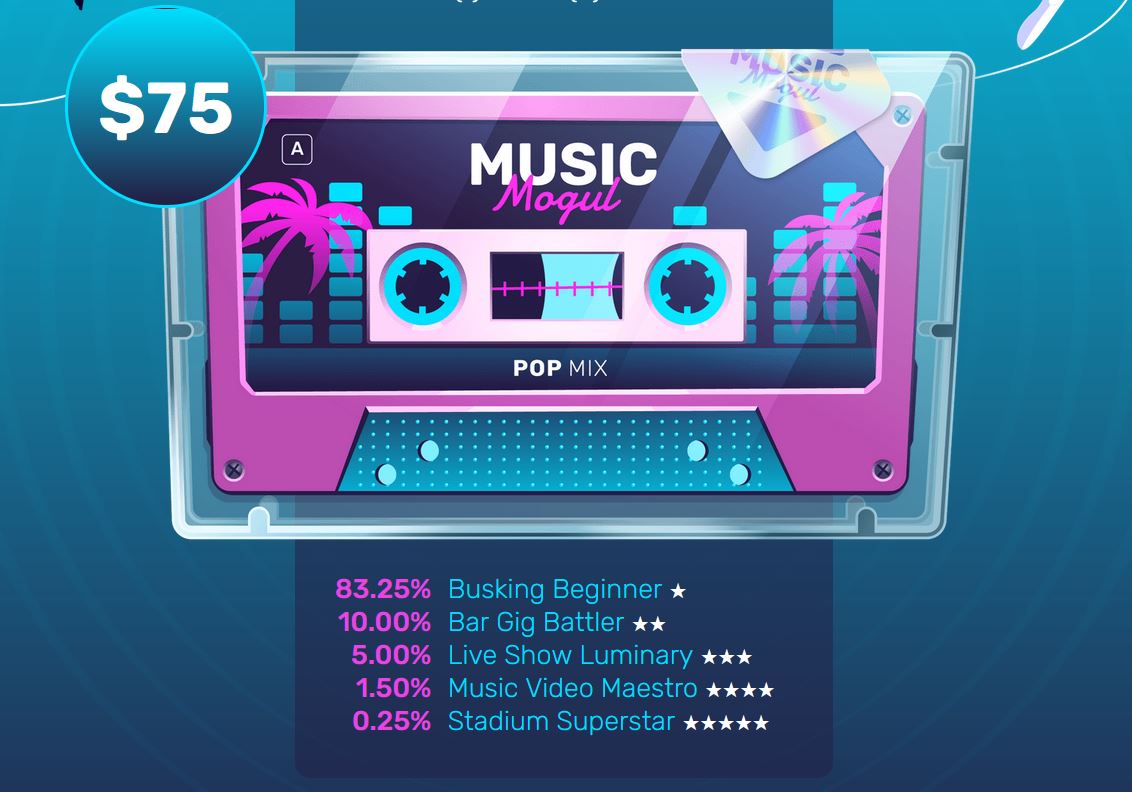 In addition to buying packs (and then secondary sales), there will be crafting:

“In order to begin crafting, you will need to own a set amount of a single artist in the same level (aka rarity). By combining and burning them, a new NFT will be minted in the next level up.

The formulas are as follows:

WAX Studios has been clear from the start that Blockchain Brawlers isn’t their only game in development, so this announcement isn’t a surprise per se. I’m also not particularly shocked to see another highly accessible, browser-based game, though I’m pleased to see this is heading in the direction of a tycoon and strategy immediately, rather than further down the road map.

The premise of the project is interesting enough and I’m certainly going to be writing a more substantial piece on Music Mogul as soon as I am able to test it, and fortunately, our relationship with WAX should mean we don’t have to wait too long.

I do have two slight reservations, however. Firstly, the press release sent out for Music Mogul made a point of calling it a Play-and-Own (P&O) game. The emerging categories of blockchain gaming are admittedly blurry, but generally, P&O means that earning takes a backseat entirely. However, in Music Moguls’ FAQ, the game is listed as Play-and-Earn (P&E) in which the game has a focus on earning, it’s just not the primary focus.

My second reservation is pack price, though this is admittedly smaller. $75 is still a rather steep point of entry for a new game, particularly one that’s not playable beforehand (we don’t even have in-game footage). Nevertheless, it’s hard to compare blockchain games with web2 games as the packs contain NFTs that could be resold, not simply CD keys that you can never do anything with.

Overall, I’m interested. If Music Mogul has the depth to it that the genre “tycoon” implies, this could be an exciting project with a fresh approach, and one that could capture widespread attention. I am also interested in why WAX Studios stepped away from Play-to-Earn (P2E); whether it’s a decision off the back of criticism of P2E or whether it’s the belief in gaming over earning. Whatever the case, it’s another string to WAX’s bow and it’s a promising one!