"With a very minimal cost of entry, amazing graphics, and fun gameplay, Forge Arena is a game that will be hard to dethrone from the list."

Welcome to the first Token Gamer Play-to-Earn (P2E) list! This will be a monthly series where we put forward the games we think belong on top in the current Play-to-Earn and Play-and-Earn environment.

In order to make the top 5 list, each game will have to meet the following criteria:

First on the list, is Forge Arena, and honestly, this was the most obvious game to list. Forge Arena is a First Person Shooter (FPS) built on WAX, and has recently added their new $SCRAP token to the game.

Overall, it is a very well-made, polished game that draws an easy comparison to CS:GO. All you need to play is to own a weapon skin, which currently are priced for less than $1. With a minimal cost of entry, amazing graphics, and fun gameplay, Forge Arena is a game that will be hard to dethrone from the list.

Up next we have Ni no Kuni: Crossworlds. This open-world MMORPG has had a huge launch over this past month. In Ni no Kuni, you can play as one of five different adventurers who can roam the world, fight monsters, and join kingdoms. The amount of different game modes is staggering, with tons of different things to do each day. The developers have also been releasing a steady stream of new content each week.

In order to earn, you will need to farm Territe or Astrite in-game, which can then be traded for their respective cryptos outside the game. One thing to note is you currently need a PC to trade out, but I’m hopeful a mobile option is coming. NFTs will also be incorporated into the game at the end of this year. This game is completely free to play, so don’t worry about paying an upfront cost to start earning.

Gods Unchained is a blockchain TCG (Trading Card Game) built on ImmutableX with earning elements in both NFTs and their native token $GODS. Like Hearthstone, there is a lot of deep strategy involved in mastering this game. Gods Unchained deserves a spot in the top five list because it is a full game experience, and one Web2 gamers would play as well. Gods Unchained has also done a number of tournaments showing they are interested in branching into eSports. The game also has increased the ways you can earn on a daily basis.

Thetan Arena stands alone as the only blockchain MOBA (Multiplayer Online Battle Arena) type game already playable. This game, playable on PC or mobile, has a fun cartoony style. There are many different champions to play and master as well as a number of different game modes to learn.

In Thetan arena, you can earn a couple of different cryptos as you progress, as well as own different NFTs, including the champions themselves. This game is really fun to play, and it’s one I’d play even without the blockchain element to it.

Ev.io is another shooter game on our list, but it plays quite differently from Forge Arena. You can play for free, but in order to earn you will need to buy an NFT using the Fractal marketplace. The power of your equipped NFTs determines how much Solana you will earn from each game you play. One drawback to Ev.io is the cost of entry is a bit high, hovering around $100 at the time of writing. It’s extremely easy to jump into a game, just go to the website and it’ll load one up immediately for you. Overall, the accessibility, fun, and easy earning put Ev.io on this list.

Skyweaver is a beautiful card-playing game, which is very similar to Hearthstone, but with a crypto element to it. There is a lot of strategy involved in this game, where every action you make could decide if you win or lose. The biggest drawback to Skyweaver is it can be very difficult to earn as it takes a long time to earn NFTs, but it is free to play, so it’s worth giving it a shot. 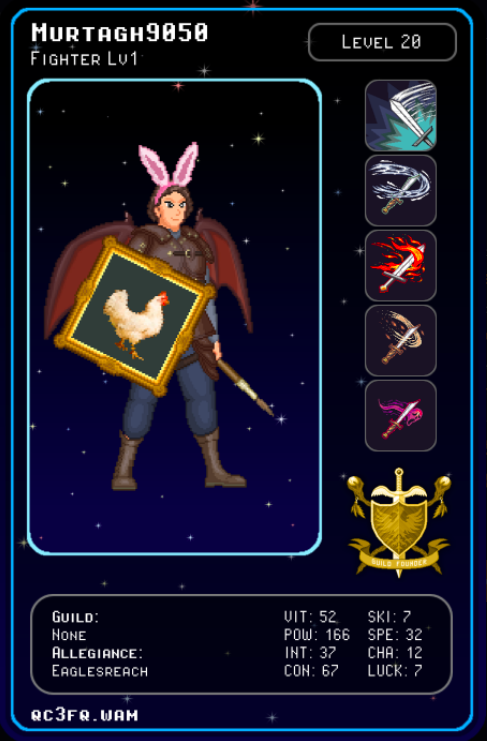 The Adventurer’s Guild (TAG) is a text-based Discord RPG, and a personal favorite of mine. In TAG your adventurer fights different monsters and goes on quests as part of your service to the Guild. You can get random NFT drops from different battles that can be used to craft better gear for you to use. Additionally there is a crypto called $GUILD which will drop and can be used for purchasing different game items.

The TAG developers are doing some really cool things with NFTs, including Guild Licenses,  which are customizable player NFTs that show the different items you have equipped in-game. The cost to entry is around 10 WAX for a beta pass, so it’s also cheap to start out.

So, what game was robbed this month? Let us know in the Token Gamer Discord channel if there is a game you think deserves to make the list!