"The title for this article isn't clickbait hyperbole: this is the best blockchain game I have played in the 4 years I've been testing them — and by some margin."

Since 2018, I’ve tested a lot of blockchain games. Some have been impressive, some have been gamified DeFi and little else, and some have been wholly forgettable. Due to how new blockchain gaming is, much of the work I do is for our Blockchain Gaming Watch series where I look at games in development. This is the first game that I have reviewed that is released (albeit soft-released in open beta) and what a game to start us off!

Skyweaver is a familiar beast, particularly in the blockchain gaming space, being similar — in principle at least — to Gods Unchained, for instance. For those of you outside of blockchain, it’s closer to Hearthstone or Magic: The Gathering Arena, just made for web3.

As of February, it has seen significant interest from gamers and investors alike, with 233,000 app installs (despite not being released), as well as 100,000 people in the Discord, 345,000 users on the waitlist, and 8-figure investments from the likes of Coinbase.

“We’ve been crafting Skyweaver for the past four years, fine-tuning the mechanics and user experience to ensure everyone can enjoy — while maintaining the purity of Web3. We’re committed to providing millions of people with easy and secure access to Web3, where everyone can own, use and enjoy digital assets. We see Skyweaver as bridging the gap that currently exists between the Web2 and Web3 gaming communities, with all the potential that holds for mass-market adoption and growth of the Skyweaver ecosystem.” — Peter Kieltyka, Co-Founder & CEO at Horizon Blockchain Games

The title for this article isn’t clickbait hyperbole: this is the best blockchain game I have played in the 4 years I’ve been testing them — and by some margin. I see the term “AAA” banded around a lot in the space, typically by indie studios with reputable and experienced employees. Some — though very few — look as if they might just manage something resembling the best quality of game you can get for their genre, but they’re years away. The rest are either delusional or hoping if they say it enough it’ll come true.

Skyweaver, however, is triple-A quality, albeit never mentioning it. I first launched the desktop version in-browser, but I loathe using browsers for games, so I made the switch to the PC client which is a joy. The GUI, the animations, the speed, the responsiveness, the smoothness — it’s all as good as it gets. With a newborn requiring my presence, I’m unable to stay at my PC for long, so I used that as an opportunity to test the iOS app, and, to my pleasant surprise, it’s as good, if not better. I would go as far as to say the app borders flawless.

I have played a plethora of TCG games and I went into this one — rather naively — as if I barely needed to learn Skyweaver; that ignorance was brief — replaced, rather ironically, with an awareness of my complete ignorance of how to be good at this game. While many of the mechanics and systems are familiar, it’s as deep as I have seen and therefore the skill ceiling is sky-high.

There are several competitive game modes and leaderboards. The ranked game mode is free to play and you can choose from Discovery or Constructed; Discovery has both players choose a hero and then receive randomized decks based on that hero, whereas Constructed allows you to use your own, player-made decks. By ranking up in these modes (you get points for wins), you will eventually win tradeable, NFT silver cards.

Conquest is slightly more complicated. It is a win-streak game mode where you win better rewards depending on how many games you go without losing. It costs a ticket to enter which is purchasable with $USDC (yes, the stablecoin), at 1.5 USDC per ticket. Every week there are different, golden NFT cards that show you how many have been minted before they rotate out, which is really interesting.

This is tricky and there isn’t currently much to say on the topic. As Skyweaver doesn’t have its own token (and no token reward for gameplay), the only way to earn any money is from winning silver or gold NFT cards and then selling them on the market for USDC, utilizing the built-in Horizon multi-chain smart wallet, Sequence. So, it’s play-to-earn (P2E), but currently less so than many other games, though don’t let that detract you.

I’d also like to mention that the way the economy is set up, there is no sign of greed from the developers, which is as encouraging as it is rare. No dedicated token, only a stablecoin, is a fascinating decision that I haven’t fully unpacked the implications of yet.

While I’m sure the developers have some stellar gaming industry experience given the quality of Skyweaver, Horizon’s pedigree in blockchain is impressive, having not only developed the Sequence wallet, but also co-created the famed ERC-1155 NFT standard (looking into this, it seems it was Philippe Castonguay, Director of Product, with this impressive feat.)

Horizon secured $13.3m in funding for Skyweaver from the likes of Coinbase, BITKRAFT, and Polychain, among others, acting as more social proof for their competence.

This is an unusual section for a review, but one I will never remove from our format. In an industry as fresh as blockchain gaming, there are rug pulls (and the term I’m trying to jam into the crypto vernacular, rug slips), and so whether a project is a solo indie dev or a well-funded studio, I will scrutinize their practices.

So far, Horizon and the Skyweaver team have been excellent. There is little to nothing I have wanted to know that I couldn’t get an answer for and their social media team is responsive. I am, of course, close with John of NFT Insider as we host the WAX Lyrical podcast together, and we were both approached independently about the game. We discussed this before our last podcast and noted how strong their communication is.

I have a friend who is pro-crypto and pro-blockchain gaming, but thinks that blockchain games are currently dreadful. While I disagree, I know what he means — they’re not at the industry standard for gaming. Much of the infrastructure for the implementation of blockchain usable by the mass market is still being built as the onboarding process isn’t good enough.

I am admittedly something of an apologist over the lacking quality and simplistic format that populates large swathes of the space, but I forgive all manner of shortcomings for the pioneering that is happening. That, and game item ownership and P2E is a breath of fresh air in a stagnating industry.

However, the first person I showed Skyweaver to, was this cynical friend. It is now the game I will roll out to the skeptics and point to when people argue blockchain games are merely gamified DeFi. It is a game that stands resolutely as the first in its class — a polished and complete project — and abstemious with its economy to boot. That is, the economy is not self-serving for the developers, and given that it uses a stable coin in lieu of its own token, absent of obvious greed.

I have nothing to add but this: if you enjoy TCG games, try Skyweaver. If blockchain technology and NFTs were removed from the game, it would still be worth playing, which I believe to be the hallmark of success in blockchain gaming 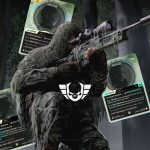 Previous articleThe Official Olympic Games Has Launched a Play to Earn NFT Game
Next articleThe Lurking Whale: Is Microsoft About to Swim Into Web3 Waters?