Immutable X is one of the frontrunners of Web3 gaming and their platform is starting to take shape. Though there isn’t a veritable feast of playable games currently using the layer 2, it does have Gods Unchained and some of the most exciting projects in development, such as Ember Sword, Illuvium, and Guild of Guardians. Now, the Immutable X staking rewards have gone live.

Immutable X’s staking system was soft-launched several months ago, but it was lacking some key functionality and polish. Now, staking rewards are live as well as a new dashboard, the details of which were laid out in a recent blog post. 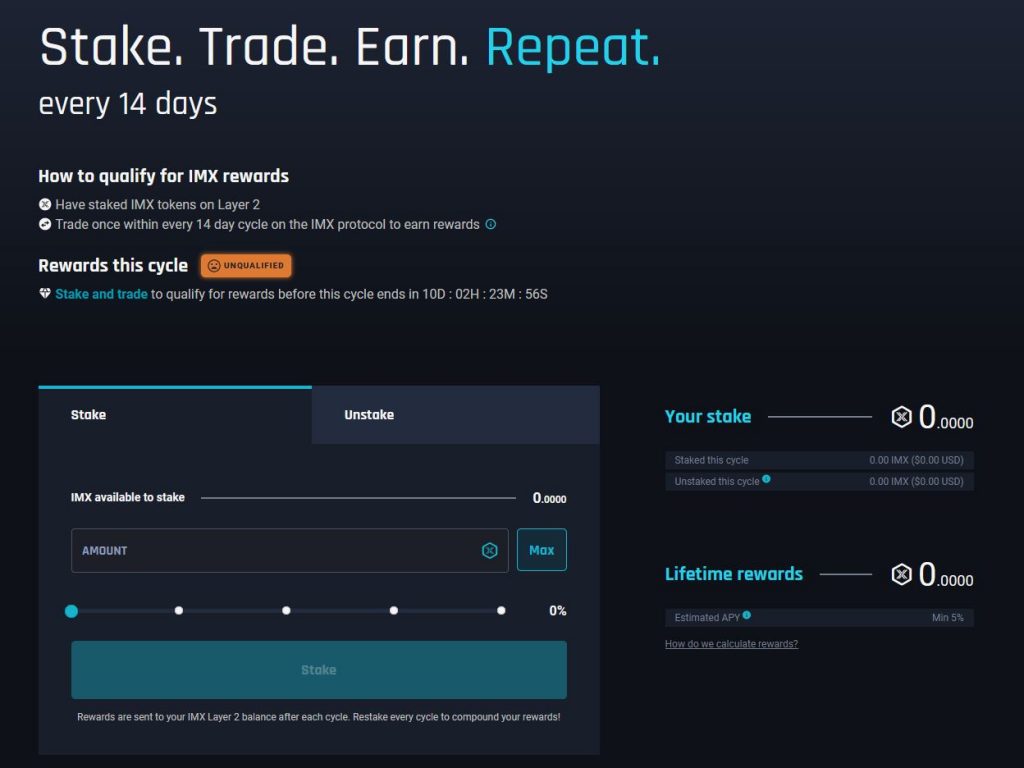 Staking has been a double-edged sword, sometimes utilized for the benefit of an ecosystem, sometimes to “artificially” boost engagement but to no real end. Immutable X is a platform I have a lot of faith in and an ecosystem I believe will continue to lead the way as blockchain technology integrates into mainstream gaming. So, that is hopefully indicative of a value-generating staking system.

The motivation behind creating a staking system has been made clear by Immutable: these sorts of rewards cultivate sustainable growth and attract more products to the ecosystem. Immutable summarizes the benefits in the following chain of events:

So, how do the rewards work?

The larger the number of $IMX you stake, and the longer you stake it for, the more rewards you will receive at the end of each cycle. A cycle will last 14 days. The rewards are calculated in the following way: The number of $IMX you staked multiplied by the average time staked in the cycle, then divide that number by the total IMX staking pool for the cycle. The total stakeable supply of $IMX as of 31st August 2022 was 327,663,668, but presumably, the pool will always be significantly lower than that.

Staking rewards come directly from the trade volume on the ImmutableX protocol. Twenty percent (20%) of the protocol fee is converted to IMX on the open market and proportionately redistributed to IMX stakers based on the amount staked.

— The Next Evolution of IMX Staking

It is worth highlighting that there is an initial promotional period for staking in which extra tokens (not taken from the above-mentioned protocol fee) are injected. This is presumably to overcome the issue of low staking and transaction volume to begin with, which could disincentivize the level of staking needed for the system to succeed.

It is difficult to say whether this new staking rewards system will have the desired effect, but I suspect it won’t have much difficulty securing stakers at the very least.