Last month, we fell in love with Tollan Worlds when Superdope played it on our Twitch channel. There was a lot of interest, but the game is currently in closed pre-alpha that requires a key to access. Well, we’ve teamed up with Tollan to giveaway 20 of them!

What Is Tollan Worlds?

Tollan Worlds is a pixel-art, Web3, sandbox MMORPG on Polygon and Elixir. That’s the cold answer. My preferred answer is that Tollan Worlds is the coziest, most nostalgic MMO you’re likely to find, and to make it all the more delicious, it’s blockchain-based. The game is easily accessible as it’s played in the Elixir launcher, the only barrier is an access key, which we can fix for you!

If you enjoyed old-school MMOs and don’t believe that a game needs to be in Unreal Engine 5 to be beautiful, you’re in luck. Art style is a tremendously difficult category to find success in and it requires a creative team with a coherent shared vision, and that’s exactly what Tollan Worlds appears to have.

Tollan Worlds also utilizes Chainlink VRF, which stands for Verifiable Random Function, and it ensures that all uses of RNG (Random Number Generation that appears any time luck is involved) are transparent and can be checked to be legitimate. Chainlink is fast becoming an unsung hero in Web3 gaming.

It is early days in Tollan Worlds’ life, but if I’ve learnt anything from 20 years of playing MMORPGs, it’s that being early is a flex like no other as the game evolves. That is the case without digital ownership, and so the notion is generously enriched with it! 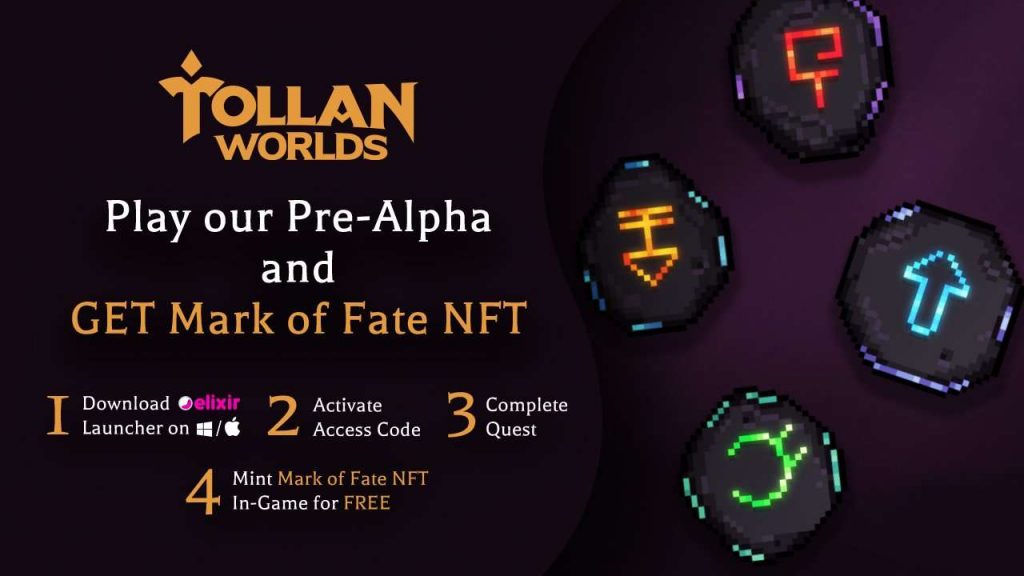 Firstly, what are we giving away? We are giving away 20 access keys to the Tollan Worlds pre-alpha, playable in the Elixir launcher. By playing the pre-alpha, you will also get a free Mark of Fate NFT which is not only part of Tollan’s first event, but it acts as a sort of proof of attendance NFT for the game’s earliest phase!

To enter, just use the Gleam widget below. If you cannot see it, click here to visit the Gleam website directly.

Previous article
Is the FTC a Hero or Villain to Developing the Metaverse?
Next article
Illuvium Begins Closed Beta of Overworld and Demos Gameplay