Solana is one of the biggest blockchains in gaming, so we got Okereke to do a breakdown of how the blockchain works and the ecosystem around it.

When blockchain came into being, starting its widespread use with Bitcoin in 2009, many thought it might only affect the financial industry. It was thought to be another scheme that might fail. However, over a decade later, and with several innovations, blockchain has positively affected virtually all industries.

This article discusses the Solana blockchain and its innovative solutions to the scalability issue faced by the likes of Ethereum. It also clarifies how these solutions have opened the possibility of blockchain replacing traditional systems in all facets, including gaming.

Blockchain has succeeded in making seemingly impossible concepts a reality. For example, gaming models are now combined with financial models in a concept dubbed GameFi.

GameFi allows players to be able to earn while having fun and convert such earnings to fiat for real-world spending. With such widespread acceptance, traditional systems are gradually being replaced by blockchain-based technologies. In an ideal outcome for gaming, the following would occur:

However, it is necessary to have scalable networks that can compete with or surpass the traditional systems for this to happen.

Furthermore, scalability is the ability of a system to continually tweak its consensus mechanism and adjust its system characteristics to achieve greater transactions per second (TPS) with the increasing number of users. In other words, if the speed and cost of transactions remain relatively constant with a growing number of users simultaneously, the system is said to be scalable.

Scalability is essential if blockchain games are to compete in terms of speed and efficiency with traditional, centralized systems. Unfortunately, popular blockchains like Ethereum would fail if the need arises to process a much larger number of transactions than what it currently handles.

The reason the Ethereum blockchain will fail is due to its processing limit of 7 – 15 maximum transactions per second (TPS). Contrastingly, traditional systems like Visa, are able to handle over 65,000 TPS. So Ethereum is currently a far cry from hitting a home run.

Then enters Solana, a blockchain that promises to be able to handle over 710,000 TPS theoretically, although they currently have 50,000 TPS running and average closer to 3,000 in reality.

Solana is a highly functional, open-source, third-generation blockchain that features high-speed and low-cost layer-1 solutions. It was created in 2017 by Anatoly Yakovenko, a former executive at Qualcomm.

It aims to scale beyond the typical popular blockchains and support the building of dapps, DEXes, games, NFT marketplaces, etc., allowing them the pleasure of fast transactions at a low cost.

The Solana blockchain was rolled out during the 2017 Initial Coin Offering (ICO) boom. After that, in 2018, the project’s internal testnet was released. Then, after multiple testnet phases, the main network was finally released in 2020.

How Does Solana Work?

Solana achieves its highly scalable network due to its hybrid consensus mechanism, Proof of History (PoH) + Proof of Stake (PoS).

Typically, blockchain transactions are timestamped, and as such, nodes verifying the transactions also verify them with a timestamp according to local time. However, with a high level of decentralization, synchronization of timestamps from different local times all over the world can take time and a lot of processing power. Hence the long time it takes to verify blocks on other blockchains.

Thankfully, Solana solves the issue of a long verification period via its consensus mechanism, which results in faster transaction times and increased throughput while maintaining low cost. To accomplish this, a network node is selected as the leader, whose duty is to generate a PoH sequence. This leader thus arranges messages/transactions for maximum efficiency and throughput. Finally, the ordered output is sent to replicator nodes called validators, who verify the consensus algorithm.

At each point of verification, there is one leader on the network who is chosen by PoS elections. The PoS system of the Solana blockchain relies on a Byzantine Fault Tolerance (BFT) mechanism called Tower Consensus. Tower Consensus leverages PoH as a standard time frame before consensus is achieved in order to reduce latency or data delays.

Furthermore, any validator node can be chosen as the PoH leader. If there is any failure detected from the leader node, then the validator node with the next highest voting power will fill the position immediately.

With such a solution in place, the Solana network can boast over 50,000 transactions currently and continuously scale as the network grows without relying on sharding or any layer-2 solution. 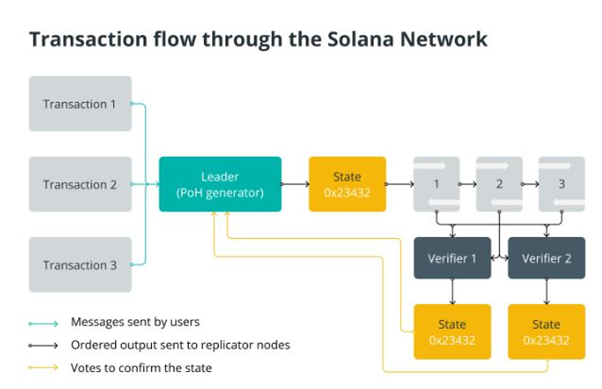 Workflow of the Solana Network: What Makes Solana Unique?

Solana was designed to solve the blockchain trilemma, a concept proposed by Ethereum creator Vitalik Buterin. He described the trilemma as a major challenge developers face when building blockchains: the inability to fully accomplish decentralization, security, and scalability in a blockchain all at once. With the increasing acceptance of blockchain technology, it was noticed that blockchains were only able to provide two of the three benefits at any given time.

What Makes Up the Solana Ecosystem?

With its support of smart contracts and its high-speed, low-cost model, the Solana ecosystem creates an enabling environment for building virtually all types of blockchain-related projects. These include:

Solana is an ideal choice for play-to-earn games, given its highly scalable network and low cost of transactions. With its current throughput, it can accommodate any and all players in several games and scale to meet transaction needs if necessary.

It is no wonder several developers are turning to the Solana blockchain for their gaming needs. Examples include Star Atlas, Genopet, and several others built so far on the Solana network. Not to mention Fractal, the blockchain gaming platform by Twitch co-founder, Justin Kan.

Achieving throughput of this nature thanks to Solana takes blockchain a notch closer to its goal than expected. Moreover, it makes it realistic to think that blockchain and its related technologies can replace traditional systems in the near future. Likewise, it’s able to scale to meet transaction needs when necessary.

It has suffered some teething problems with outages this year, but it is still one of the premier blockchains for gaming and with those issues solved, it could help propel the space forward. 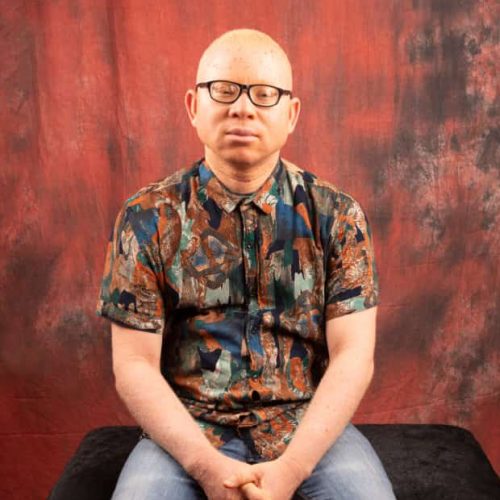 Previous articleForge Arena is Launching Their Play and Earn Mechanics!
Next articleNi no Kuni: Cross Worlds: Is This a AAA Game With Blockchain?

Unity and Unreal Engine SDKs to Be Launched by Enjin

Solana Suffers Fifth Outage of 2022: A Concern for Blockchain Games