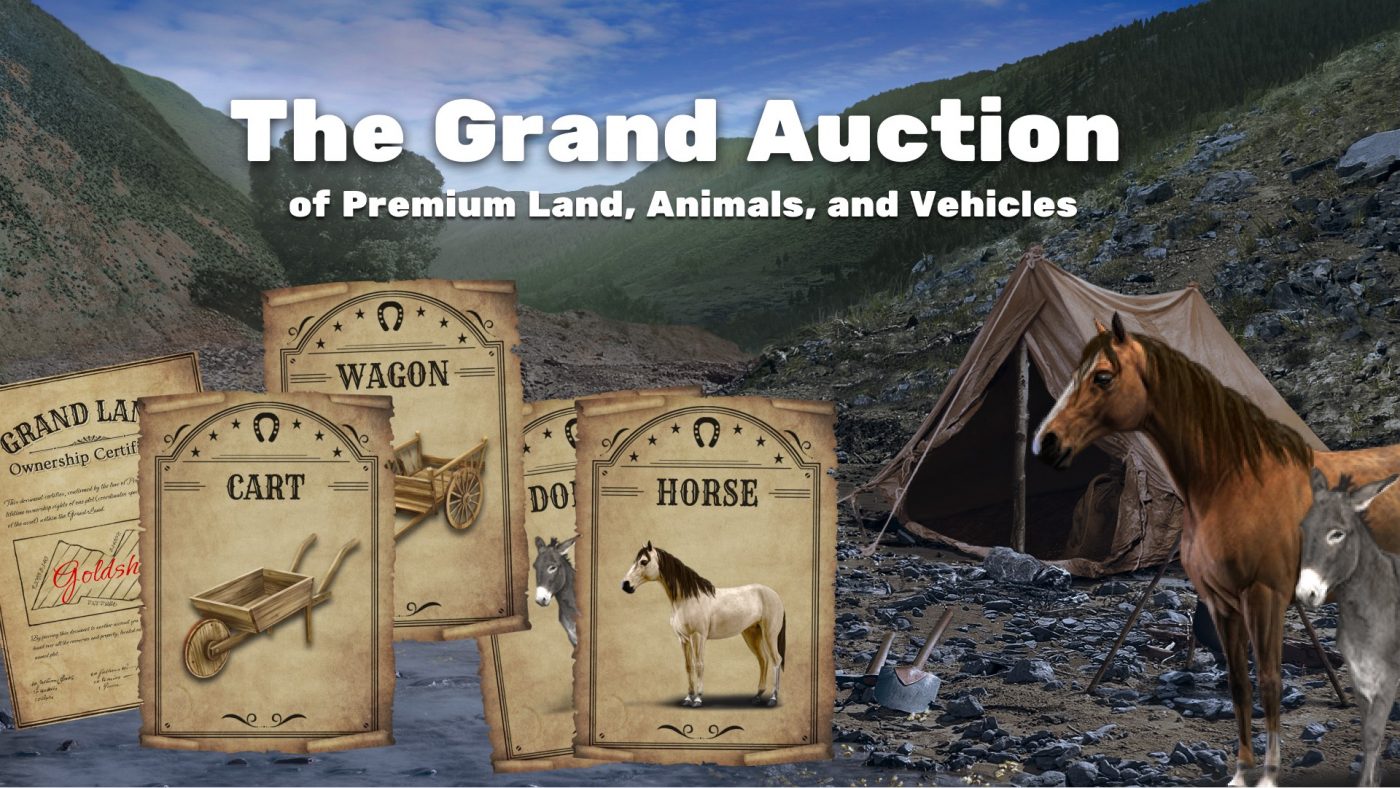 Goldshire is the golden heart of the Prospectors game. A small but beautiful territory, colored in gold on the map (see graph) that runs adjacent to the State Plots in the center of the map. A short distance to the Railroad, Central Bank, University, Government, and other State buildings Goldshire plots offer considerable advantages to their owners.

Goldshire plots are the closest to the center allocated for private ownership. That is why the region is meant to become an epicenter of the business life of the Grand Land.

There are only 112 plots in Goldshire. This means that only 112 players who are ready to fight for their opportunity to settle here, will win the right to work side by side with the best businessmen in the prospectors metaverse. Plots within Goldshire will be distributed through the 14-days long auctions along with the auctions of animals and vehicles. The auction of land will end two days before the launch of the Grand Land.

During the Auction of Premium Land, Animals, and Vehicles, 512 assets will go up for bid. Let’s review some features of the other assets which are going to go on sale.

The plots will go on the auction one by one starting from a certain plot in the outside row, moving in a spiral inwards, toward the plots nearest to the center. You‘ll know the coordinates of each plot on auction. One more thing you should learn, the plots will be minted each time after the end of the auction period, therefore, the plot minted after the first period will have mint number 1, the one sold during the second period will have the mint number 2 and so on.

The animals and vehicles are other types of assets, which will be distributed along with the land. Animals (horses and donkeys) will help your workers to move faster. A very nice benefit to have!

A worker moves three times faster riding a donkey, than by foot. While the horse increases his speed four times. Those are great rewards, taking into account the huge size of the Grand Land map.

Overall there will be only 100 donkeys and 100 horses on sale. Don’t miss out!

There are two types of vehicles in the Prospectors universe: carts and wagons. The main difference between these vehicles, except capacity and lifetime (see graph), is the fact that the worker can put the cart into his backpack when he doesn’t need it anymore. Adversely, the wagon loses hours from its lifetime whenever it is attached to the worker. The only way to same its lifetime is to park it on your plot.

Overall there will be 100 carts and 100 wagons on sale during the auction.

The Technical Details of the Auction

If you’ve attended any of the previous Prospectors auctions, the rules of this one will be pretty much the same: bid more than the person before you, and if you are the top bidder at the end of the 3 hour period, the game asset will be yours.

One plot and three other assets, chosen randomly, will go on sale in each of those periods during the first 14 days. During the last two days you’ll be able to buy animals and vehicles only.

WAX Is the Most Active Blockchain in the World: Are They a Future Gaming Titan?