CyberTown: The Metaverse Game That Was 20 Years Too Early

The metaverse is an old term, coined by Neal Stephenson in the novel Snow Crash nearly 30 years ago. However, its modern, digital interpretation is fresh and ill-defined. But, how new is it really? Introducing, CyberTown.

“Not very long ago, just before your time, right before the towers fell, circa ’99. This was catalogs, travel blogs, a chat room or two.” These words by Bo Burnham resonated with me. 1999 was a strange year. Everyone was in the brace position ready for the Millenium Bug, where technology, in perfect synchrony, would defecate the collective bed as calendars ticked over to 2000. PayPal was tipped as one of the ten worst business ideas of the year. Carmen Electra was one of the most searched terms, which was primarily at my 11-year-old hands.

In fact, the internet is where I chose to dwell during every second of my free time — little has changed on my end. It was a touch trickier as it was my father’s computer and I was only ever one outbound call by my mother away from disconnection. Still, I saw something in a digital existence and I still do.

One lightly frosted winter’s evening in the last year of the ’90s, I strayed away from tormenting a frog in a blender on Joe Cartoon. A friend of mine, we’ll call him Tim (because his name was Tim), mentioned this new type of game — an online world where you could buy houses and items and have a job. The latter sounds absurd to me as an adult, but having lost that summer to Shenmue on the Dreamcast where we took turns driving a forklift to earn in-game Yen, we were frothing at the idea of a career change.

The game was CyberTown and it was a metaverse 20 years too early.

CyberTown: A Prophecy of the Metaverse, Digital Land, and NFTs 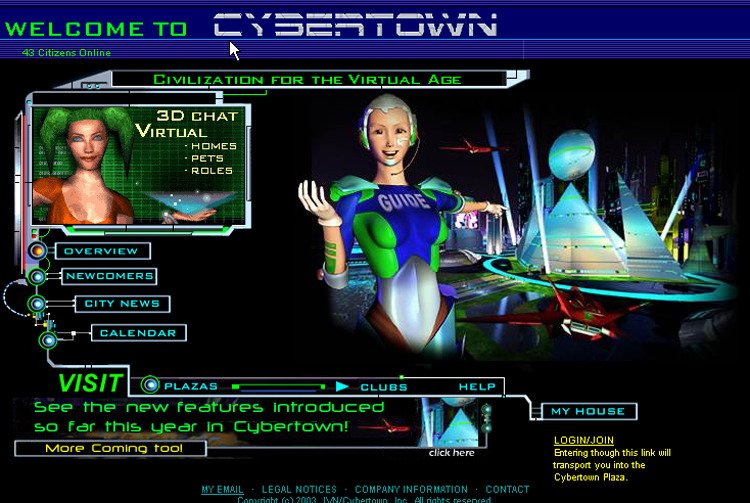 In 1999, there wasn’t all that much to do on the internet; travel blogs and chatrooms were about the size of it. A game that I could play online with a friend was staggeringly exciting and I have been chasing that dragon ever since. I remember jumping into this 3D world for the first time and being overwhelmed by its scale and by seeing other players — real human beings piloting polygon people around.

CyberTown started life in 1996 as Colony City — a demo project of Sony made in VRML (Virtual Reality Modeling Language). VRML allowed the creation of 3D content as well as virtual worlds and avatars, which for one of the first times, were being shared with multiple users that could interact with one another, courtesy of Blaxxon servers. Players were able to use VRML to create items that other players could buy in the game’s Mall and display in their houses. There may have only been a few thousand players, but it felt like a bustling metropolis.

My first journey around the Plaza was a solo adventure that swiftly went south. A person walked up and began messaging me, asking basic questions about whether I was new to CyberTown. I explained I was and this person offered some advice, explained some of the basics, and then upon learning I was an 11-year-old British boy, aggressively groomed me until I turned my computer off and had, what looking back was, a panic attack — true story. The internet has been a dangerous place for decades, folks.

Though I was now wary of strangers (a valuable lesson in many ways), I had this itch to get back online. The next time I logged on was with my friend and he showed me the ropes of how you earn in-game currency, the hierarchy of players (there was a sort of police force that players seemed to collectively agree to respect), home ownership, and even a marketplace. I purchased my first house — a neat, minimalist one-bed apartment — and my friend and I went exploring. There is precious little content left on the internet to show the game off, but fortunately, I found the below video to give you an idea.

I logged into this digital tribe most nights, living an adult life in a neon-bathed future. I had a job in the city where I earned CityCash (CC), intent on buying a better house, but having my wide child eyes distracted by things on the marketplace. In September 1999, Sony announced the Playstation 2 with its cutting-edge graphics, and I salivated all over my glossy copy of Playstation Magazine. Then, to my glee, a 3D render of the Playstation 2 appeared on the marketplace and I spent every last penny I had, rushing back to my apartment to plonk it on top of a sideboard and wait for my friend to log in and come round. 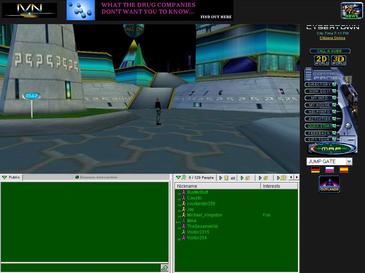 For a man of words, I’m tethered to a frustrated silence when trying to communicate the gravitas this little experience had on me. I was sitting at home, exploring a “realistic” world with my friend; I had a house, possessions, income, and a list of things to do. It all seemed unthinkable and pioneering, as if I’d stepped into a George Orwell novel before I knew what that was. I was enthralled and as the game’s population dwindled and I logged in less and less, I never stopped thinking about this strange little project. What was it that captured me?

Alpha Testing the Metaverse and NFTs

As the years rolled on, I thought about CyberTown continuously. I wasn’t sure why it resonated with me, but I wanted it back. I began to play online games regularly and on my own PC — Unreal Tournament, early iterations of Counter Strike, Quake, and so on — but the communities were never the same. I didn’t scratch that itch again until around 2003 when I played Eve Online and then in 2004 with World of Warcraft.

It wasn’t quite the same, but there were a lot of similarities; communities, roles, stories, possessions, and an economy — the linear nature of gaming up until then had been broken by the advent of MMOs. I never quite got my digital home again (despite the two-decade-long call for player housing by gamers) or another online job, but it was close.

Then, around 2017, I learned of blockchain technology. Dave (my co-founder of Token Gamer) and I frothed and crooned over its application within gaming, items having true ownership as NFTs, currencies becoming tokens, and it all made sense. CyberTown laid the roots for a future 20 years later. I had been testing a metaverse and NFTs before blockchain had been a twinkle in Satoshi’s eye. Now, I’m right back where it started, sitting in bizarre and primitive polygon worlds. The only difference is that today we have the technology to elevate the experience past roleplaying and good faith.

“We’re so early” is the battle cry of so many in our sector, and maybe we are, but the future has been in the making for decades.

What Is Artyfact? A Web3 Gaming Metaverse on Binance Smart Chain