You may have read about Bitcoin a few years back as a way to buy legally questionable items off the dark web. Or in stories about a friend of a friend who bought some five years ago and now lives on their own private island with monkey butlers.

Don’t be fooled, though! Cryptocurrency is not just a get-rich-quick scheme. It’s an ingenious next-generation technology that offers multiple benefits over our current monetary systems. It allows users to securely hold and transfer digital currency without the need for banks, and, depending on the cryptocurrency in question, allows for faster transfers and less fees.

However, as with all new technology, we must learn how to use it, and it must adapt to challenges that widespread use entails.

One of these challenges is making it easy for people to buy and hold crypto. Since cryptocurrency strays from traditional methods of storing and using currency, it’s important to understand the underlying structures of crypto and what they mean for the user. So, without further ado, let’s begin!

Cryptocurrencies are digital coins or tokens that are used to hold and transfer value and, in some cases, can be used for higher level functions (we’ll get to that in a minute). For simplicity’s sake, I’ll use the three examples of Bitcoin, Ether and Enjincoin to illustrate different properties of cryptocurrencies.

Bitcoin is the original cryptocurrency, and functions similarly to gold — there is a limited max supply, so once all Bitcoins are in circulation, no more can be created (just as there is a limited supply of gold on earth). With traditional fiat currencies, more is always being minted, which over time leads to inflation (the devaluation of each unit of currency).

There is a total supply of 21 million bitcoins, and through the process of mining, participants in the system verify blockchain transactions in exchange for a block reward. It’s comparable to actual miners mining gold, releasing it from the earth and being rewarded for their hard work with said gold. With bitcoin, the act of mining (which involves solving computationally-intensive puzzles in a process called Proof-of-Work) incentivizes users to maintain the bitcoin ledger.

The Ethereum network uses the same PoW process as Bitcoin (for now, as the network is planning to migrate to a different consensus process called Proof-of-Stake). However, Ethereum differs from Bitcoin in that it is not simply a store of value — the Ethereum network allows for cryptocurrency-powered decentralized applications (dApps) and smart contracts.

Smart contracts contain code that automatically executes when certain conditions are met and records the results to the blockchain. For example, when purchasing a virtual item using Ether, the contract would state the agreed upon price and only release the item to the buyer and the Ether to the seller once that condition was met. This example has no need for an intermediary between the two parties (such as a payment provider/bank) because it is a trustless system.

For a more in-depth look at Ethereum and related blockchain technology, check out Martyn’s article on it here.

ERC-20 is a smart contract protocol that allows users to create and manage virtual tokens which can function as utility tokens, currencies, and more. Many blockchain based startups are based on Ethereum and use ERC-20 tokens. Enjincoin is an example — users can purchase ENJ tokens which have a value dependent on demand (total supply is 1 billion ENJ) and can be used to mint fungible and non-fungible ERC-1155 virtual items.

One thing you might ask after reading the above is: if I don’t need a bank, how do I create an account to store my crypto?

What you will need is a crypto wallet. Wallets are simply an interface between you and the blockchain which allow you to keep, receive, deposit, withdraw and trade cryptocurrencies and virtual assets. When you generate a wallet, it creates a set of two keys: your public key and private key.

Your public key is essentially your wallet address — similar to a bank account number. Your private key is like your password — it is used to authenticate transactions. If your public key and private key match, it allows you to access the funds stored on that address.

There are many software applications that allow you to generate and control wallets, and are available to download for mobile and PC/Mac. Here are a few good ones:

The Enjin Smart Wallet is free to download and allows users to create, import and monitor an infinite amount of wallets. It also boasts a number of security features making it the most secure software wallet currently available. It also allows you to view your collectable virtual items, complete with pictures and metadata about the item.

When creating a wallet in the Enjin Wallet app, it creates a set of 12 seed words that can be used to restore your wallet in case your device is broken or inaccessible. This is a common security feature and is recommended that you keep these seed words in writing somewhere safe.

The Enjin Wallet allows you to store Bitcoin, Litecoin, Ether and any ERC-20 coin, as well as ERC-721 and ERC-1155 virtual item tokens. In the future the Enjin Wallet will be updated to support more popular cryptocurrencies.

Download the Enjin Wallet for your smartphone or tablet on Google Play or the App Store. In future, Enjin Wallet will also be available for PC.

Metamask is a web-based wallet client that allows users to store, send and receive cryptocurrency and blockchain virtual items. It can then connect to dApps over your browser using the Metamask plugin, which is available for Chrome, Firefox, Opera, and Brave Browser.

If you intend on buying and storing large amounts of cryptocurrency, you may want to consider a hardware wallet. Hardware wallets are devices that store your private keys in encrypted form and interface with computers or other devices to access your keys securely. Because they are not internet connected like phones and computers they are much more resistant to being hacked.

While hardware wallets can be a bit pricey, many would argue it’s worth it for the increased security. Popular makers of hardware wallets include Ledger (Nano S, Blue) and Trezor (Model T, Trezor One). 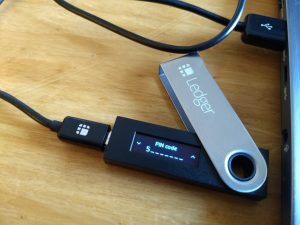 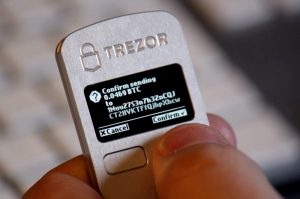 That about wraps up the basics! Next up: we get into the nitty-gritty of blockchain and discuss hashing and consensus algorithms.

8,000 Wallet ‘Solana Hack’ Unrelated to the Protocol or Its Cryptography