Avoid Being a Victim of Rug Pulls: Read This Statistic

"These charlatans are unlikely to want to play the long game, instead, they will Occam's Razor to the stolen funds; what better industry to do that in than one driven so heavily by FOMO and getting in early?"

This week we saw yet another Web3 game rug pull, leaving players out of pocket. Dragoma, an adventure game on Polygon, saw its token’s price drop by over 99% after around $3.5m were allegedly stolen. In the wake of this familiar incident, there is one statistic that could be useful to those affected by, or worried they will be affected by, rug pulls.

2021 was a staggering year for blockchain gaming, in terms of growth and investment. However, it was also a hotbed for rug pulls. According to the brilliant Chainalysis, $7.7 billion worth of cryptocurrencies was stolen through scams. More pertinently, 37% of that figure was a result of rug pulls, contrasted with just 1% the year before.

2022 may have seen some more tragically lucrative rug pulls and we have reported on many (here’s an example), as well as the rarer rug slip. It’s an area I write about often and speak about just as frequently on the Mint One podcast; usually on how to avoid this brand of scam. Nevertheless, there’s one red flag I wasn’t aware is as important as it seems to be. But first, what is Dragoma, and what happened?

Dragoma: Another Day, Another Rug Pull

Dragoma looked to be another move-to-earn project, combining GameFi and SocialFi (these portmanteaus are getting ridiculous.) However, after the token peaked at between $1.67 and $1.78, and the project launched, tokens were sold, the liquidity was drained, and the price tanked to $0.0005 as of the time of writing this. If you were in any doubt over whether duplicitous behavior had been going on, wonder no longer: Dragoma’s website, Discord, and social media accounts have all been deleted.

Immediately, the sleuths got to work and found that in a recent press release, the game is credited back to Ken Graese from Texas. There are doubts about whether this is a real person or a pseudonym, and although this does not provide conclusive evidence for either, I tracked down his LinkedIn page: 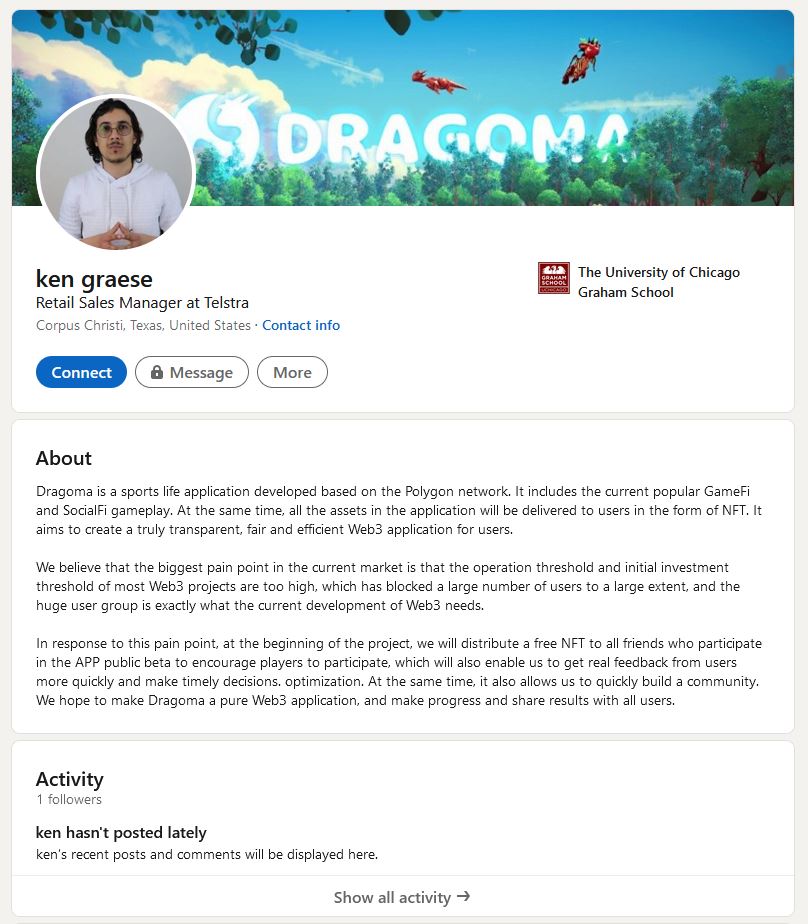 This person, if real, ought to be given the chance to explain what happened (it could have been a hack, though I would have hoped to have seen an official statement by now.)

So, what can we learn?

The Rug Pull Trend That Could Keep You Safe(r)

So, we know that scams are still coming thick and fast and I would be surprised if rug pulls were down all that much from 2021, though with the bear market, it may appear as if the situation has improved. However, in the Chainalysis report on crypto scam revenues, there are two fascinating statistics. The first is what I mentioned at the start of this article, but here is a graphic: This shows the sharp incline of rug pulls in 2021. It is plain to see just how significantly the frequency of these rug pulls must have increased, as well as the rewards plundered from them. The statistics we can learn from, however, are in a more macro view.

Firstly, there is the number of unique scams. This is a better metric than simply the dollar value extracted as one huge rug pull could skew the numbers. The above graphic shows that, generally, the number of scams has been increasing year on year. I cannot speak to why 2018 saw such a spike, but if I had to guess, it would be capitalizing on the ICO boom that started mid-2017. This likely attracted the unscrupulous around the end of 2017 and into 2018 as people saw how much money was on the table and how little regulation was in place.

The statistic we can glean actionable information from is in the rather obscure metric of “lifespan of average scam”: As we can see above, the lifecycle of scams in crypto has been shrinking rapidly; that is, people are cutting and running earlier and earlier. In 2020, the average scam was active for 192 days, in 2021 that was down to 70 days. There could be myriad reasons for this — more money on the table than ever before, market volatility, more wary users, etc. — but whatever the case, the trend is clear.

So, what can we learn from this when it comes to investing in Web3 games? The project’s history matters. If a project has seemingly just emerged out of nowhere with a newly registered domain, fresh social media accounts, and is promising the earth, a siren ought to go off. We learned this first hand when we did a giveaway with a project that managed to dodge most of my red flag checks, only for them to rug pull a month later. When the Token Gamer team reviewed the project looking for ways we can improve our checks, the glaring mistake we made was that the website and all socials were far too new (though they had a plausible explanation.)

The old nemesis in crypto is FOMO and rug pull projects exploit that in the extreme. This is further exemplified by the shortening lifespan of scams in crypto where the loot from scamming people is so heavily frontloaded that there’s little point in dragging it out, from a financial perspective. These charlatans are unlikely to want to play the long game, instead, they will Occam’s Razor to the stolen funds; what better industry to do that in than one driven so heavily by FOMO and getting in early?

So, when in doubt — and especially when a project is new — wait.