"For now, there isn't much information to share, but I wanted to plant a flag in Spacebar. They either had the best pitch deck known to mankind, or whatever this Web3 platform is, it's shaping up to be something special. All I know is that I am going to be close enough to disseminate which it is, as soon as it's possible to do so."

There is a sea of projects achieving funding left and right in the last 18 months. It has reached the point where I no longer choose to report on them all (and wouldn’t have time to even if the inclination was there!) In fact, it has reached the point where 7-figure investment rounds aren’t indicative of a project being worthwhile, which is telling in itself. However, sometimes the story isn’t the amount invested, but rather, who invested it. Enter, Spacebar by AO Labs.

Who Is AO Labs?

AO Labs is a Web3 organization looking to build, open-source, community-owned networks in one platform.

Our mission is to lay the groundwork to build a playground where Web 3 communities can collaborate, create, compete, and be themselves. In the playground, communities and their members will be creating a chain of values, which in return they would capture a portion of the created value which will exponentially grow over time. The playground will become a means itself and take part in the process of a never-ending cycle of creation and composability.

The form this will take is still being defined, but the name of the project is Spacebar. 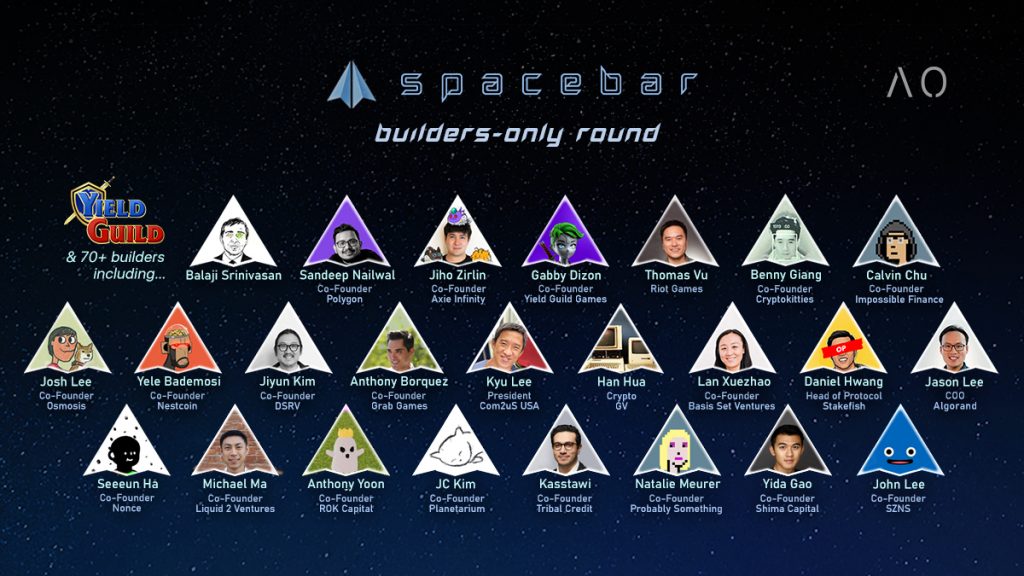 The concept of the Web3 platform, Spacebar, is a “community-owned, ever-evolving modular game.” I like these words, but they don’t tell me a great deal. And this is about as specific as I can get with the current information available, as much of what is said about Spacebar by AO Labs is vague platitudes. Nevertheless, it is likely that whatever is in the works has some real potential for one reason: its investors.

In the above graphic, you can see a selection of the investors from the first round which was for “builders-only”; in essence, they looked for investors who have already achieved something in or around Web3. In among the 70+ investors are the co-founders of Polygon, Axie Infinity, and Yield Guild Games (YGG), as well as Thomas Vu, a senior figure at Riot Games.

For now, there isn’t much information to share, but I wanted to plant a flag in Spacebar. They either had the best pitch deck known to mankind, or whatever this Web3 platform is, it’s shaping up to be something special. All I know is that I am going to be close enough to disseminate which it is, as soon as it’s possible to do so (and steal the pitch deck in the unlikely event it’s that.)

Previous articleAvoid Being a Victim of Rug Pulls: Read This Statistic
Next articleWhy Do Blockchain Gaming NFTs Have Royalties?