WAX is a familiar name to the blockchain gaming connoisseurs, but an obscure token outside of the top 100 to most. Nevertheless, it has been quietly accruing some impressive accolades and establishing itself in a strong position in the industry. WAX has seen a small spike in price lately, and although price is not indicative of an ecosystem’s value per se, it could be a reasonable response to a recent report.

I will preface this article with some important transparency: Token Gamer is a WAX guild and active block producer for the network, which we receive $WAXP for performing. I have held $WAXP personally since 2019 and I own a lot of WAX NFTs. Blockchain Brawlers is a game produced by Tyranno Studios, which is owned by WAX, and I am an ambassador (albeit unpaid) for the project. Although I do my best to be impartial, these facts could put my opinions into question, so you should have all the relevant information before reading on! That said, there isn’t a great deal of opinion-based analysis in this piece.

I rarely write heavily pro-WAX articles because I don’t want to appear biased, but I wouldn’t ignore these statistics I’ve seen if they were about any other blockchain, so it would be some bizarre reverse bias to not write this article.

The statistics about WAX in 2022 are in DappRadar’s excellent report on the last year in crypto and they are worth some attention.

DappRadar is one of the most valuable resources in Web3, not only for their rankings and live market statistics, but their reports on the industry. The report that many were waiting for is now available: DappRadar Industry Report 2022. I would recommend reading this report as it has a wealth of valuable information, but a trend stood out in particular.

WAX may not be the blockchain on everyone’s lips, but it has had standout performances in 2022. Incidentally, WAX had some strong results in 2021 with over 80% of game-related transactions across all blockchains being processed on WAX. However, 2021’s stats pale to what this ecosystem has achieved in 2022, despite the brutal downturn. There are 2 interesting statistics I want to focus on. 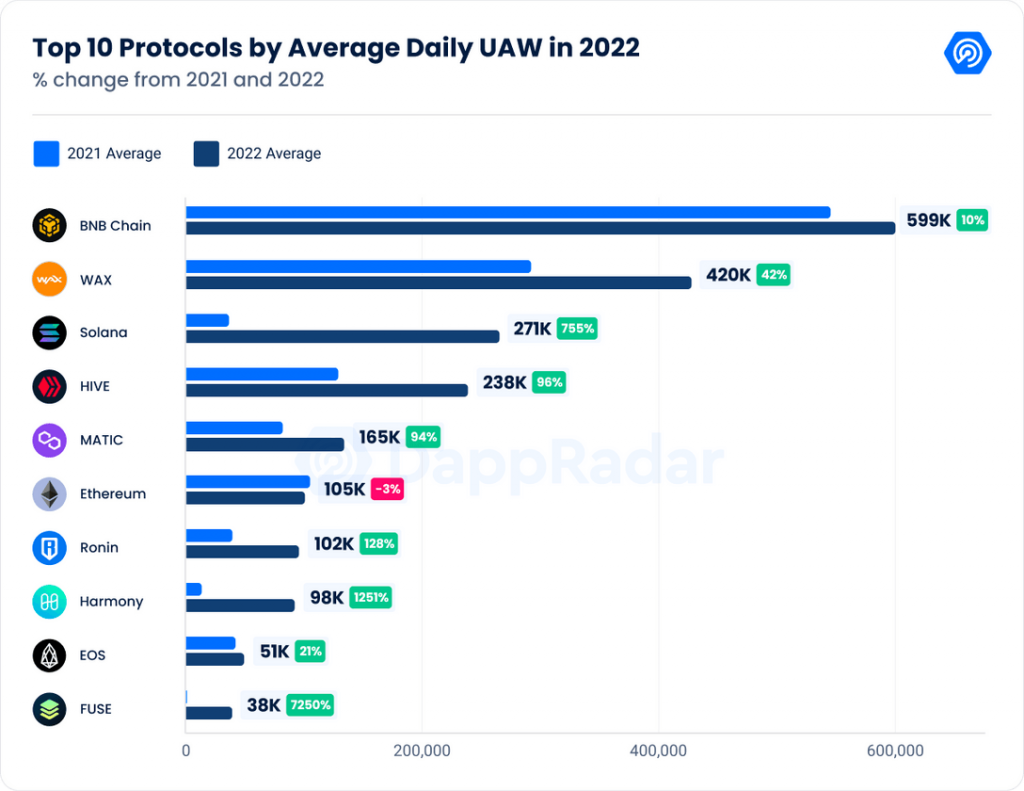 The above graphic is fascinating for three reasons. Firstly, WAX is second on daily Unique Active Wallets (UAWs) despite being a lesser-known chain when compared to the likes of BNB, Solana, Polygon (MATIC), Ethereum, Ronin, and even the chain WAX is forked from, EOS.

The second noteworthy finding is growth. Despite having a strong 2021, WAX saw a 42% increase in average daily UAWs in one of the worst years crypto has ever seen. The only protocol to have more daily active users in 2021 was Binance (BNB), and although they retained the top spot, they only managed 10% growth.

The third interesting finding is an extension of the growth statistics. The protocols that saw the most daily UAW growth in 2022 — and some of them saw an explosive increase — still haven’t caught up with WAX’s 2021 average. Even Solana, which despite its outages had a fantastic year and is a top 10 coin, didn’t quite reach WAX’s 2021 average, let alone the 2022 average of 420,000. 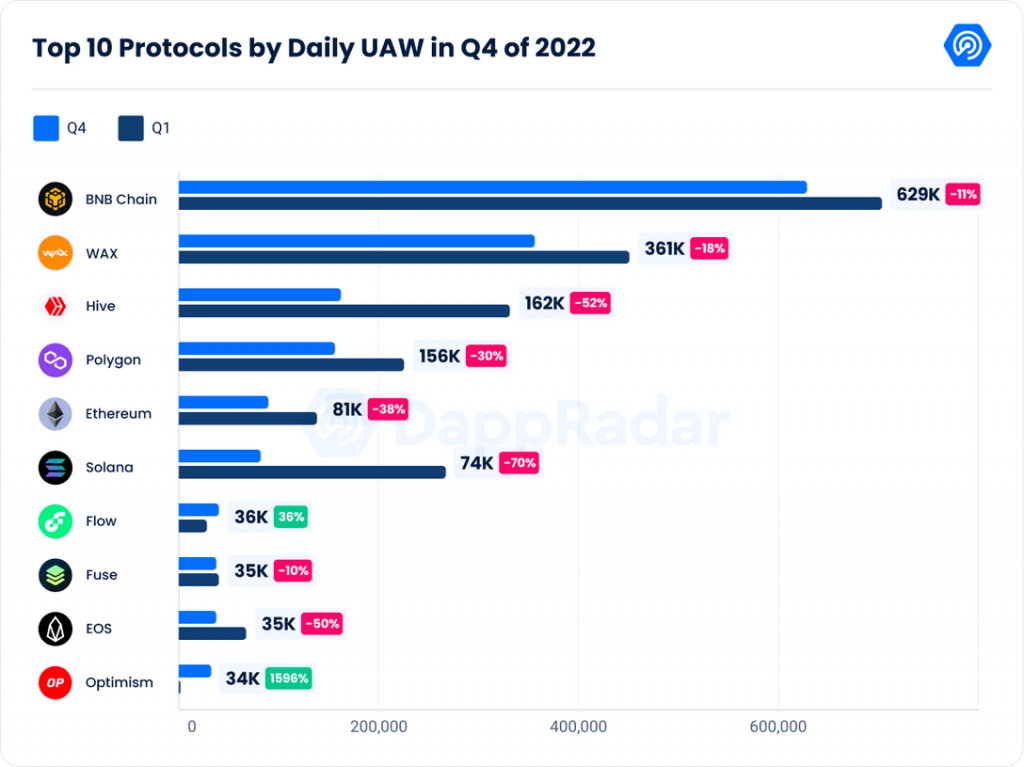 Quarter 4 of 2022 was about as rough as it gets for crypto courtesy of the FTX news breaking. Damn-near everyone saw a hefty loss, with Solana suffering the worst of it due to the chain’s connection to the disaster. Nevertheless, WAX’s hit wasn’t nearly as bad as most major chains — a fact that could be in part due to WAX’s blockchain gaming foundations given that gaming was demonstrably resilient to the reactive industry-wide pullback. 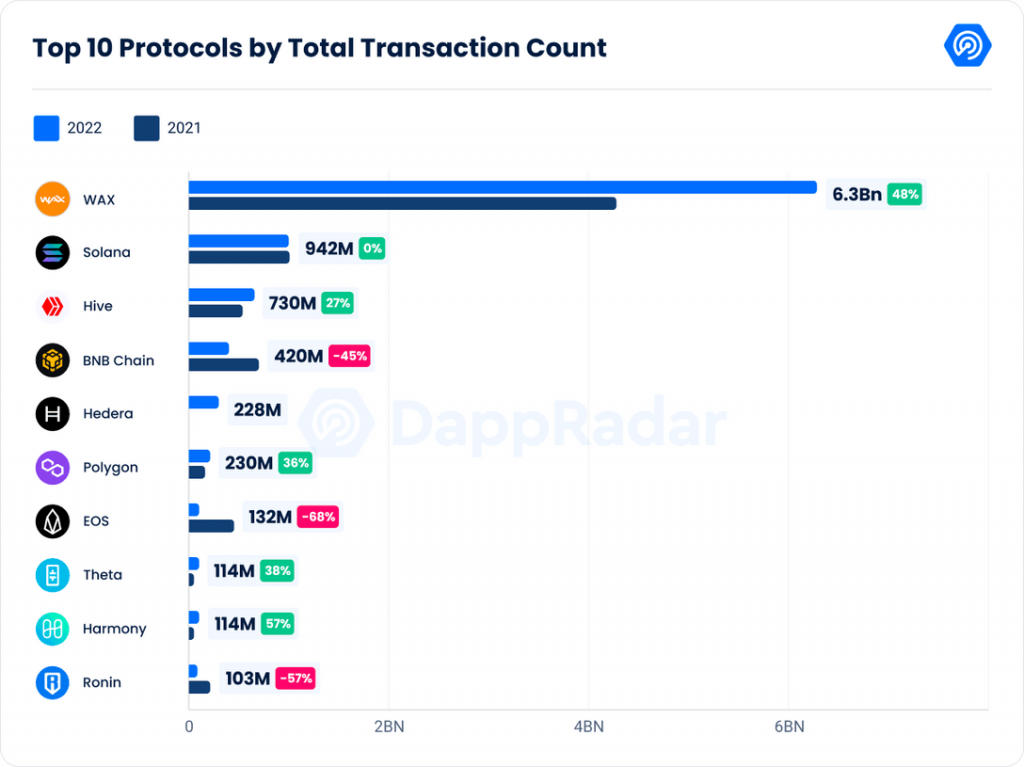 As impressive as the UAW statistics are, the piece de resistance for WAX in 2022 is the total transaction count. In 2021, WAX dominated the transaction count rankings, over doubling second place. In 2022, WAX is over 6 times second place with a ludicrous 6.3 billion transactions. What is truly absurd about WAX’s 2022 performance is that it is nearly 50% higher than 2021. Only 1 other chain in the top 10 saw growth that high and that was Harmony with around 50 million to 114 million; a drop in the ocean compared to WAX’s numbers.

What is baffling to many about WAX is the huge disparity in price and coin ranking when compared to its rivals on this list. As of 22/01/2023, Ethereum is 2nd, BNB is 4th, Solana is 10th (despite its woes), Polygon is 11th, and EOS is 44th. WAX is 162nd. Even Hive, which has seen strong growth but is a long way from WAX’s numbers, is higher than WAX at 144th.

WAX is far from a perfect ecosystem — newsworthy partnerships are nowhere near what the likes of Polygon are achieving with their Starbucks and Reddit onboarding, for instance. Even in the Web3 gaming sector — an area in which WAX has performed incredibly well — Immutable X has eclipsed WAX with upcoming games. However, the fundamentals are utterly undeniable.

WAX has had no outages, it’s carbon neutral, has no gas fees, lightning-quick transaction speeds, a high maximum transaction tolerance proven over several years, and has several brilliant marketplaces including “the busiest in Web3”, Atomic Hub. It seems that the primary causes for the disparity are social clout and big-ticket partnerships. Will 2023 be the year WAX’s staggering statistics are matched by fitting partnerships and brand onboarding?

Previous article
Why Alien Worlds’ Galactic Hubs Grant Could Be the Future
Next article
Back to Basics: Play Chess on Your Phone, Earn Bitcoin